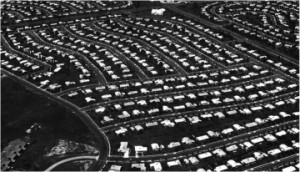 The developer-builder operates under a series of environmental pressures the most important of which is to sell homes while making a profit.  The Developer-Builders consider first costs, first because profit equals marketability less first costs.  Lifecycle benefits have no power over a builder unless those costs can be justified in sales.  Not surprisingly, strategies such as solar aquatics systems, solar panels, geothermal, etc., have no attraction to the Developer-Builder because the long-term costs savings are realized by the Owner.  So where is the magic line between additional up-front costs and increased marketability?  Robert Hauser of Stonehaus Development in Charlottesville, Virginia thinks an increase in costs of 3-5% is an acceptable risk if his company can successfully brand its houses as energy-efficient.

That leads us to consider adaptive options that are within the Developer-Builder risk-tolerant zone.  So the question is, how can we achieve carbon neutrality by 2030 in a cost-effective way?  We must do so optimizing passive strategies: community, massing, envelope design, and passive solar – all strategies with lower first costs. This is what it will take to transform a profit-driven industry.

architecture of the fittest – 01

Posted by Allison / architecture of the fittest, biomimicry, sustainable design Fossil records support a theory on evolution whereby isolated populations, subjected to a new environmental pressures adapt rapidly, often within several or a dozen generations. We humans, occupants of the habitat we callThe World, now find ourselves in a like predicament – confronted by a changing environment, we must adapt and do so quickly, achieving carbon neutrality by 2030 (See Ed Mazria’s 2030 Challenge).

According to the Punctuated Equilibrium theory described above (the debate continues between these adherents and the Gradualists like the feud between the Hatfields and McCoys), the isolated population, having adapted to the new environment, now reintroduced to its original habitat, out-competes its sister lineage.  The homebuilding industry is developer-builder driven (20+ percent of the market is built by the ten top builders). In evolutionary terms, the Developer-Builder is the general population which operates on the premise of stasis.  We, let’s call us Team 2030 – the Ecohome-read’in, LEED-A.P.’in, xeroscap’in, carbon-sequester’in, Greenspec-tot’in, , Biophiliacs — those committed to changing the business-as-usual of the industry — must define a new species of building, one that operates at scale.