We design with the philosophy that engaging people in our buildings is key to a project’s success.  We think a lot about how to create opportunities for discovery, for collaboration, for a conversation with nature… Take for example, The Lewis & Clark Exploratory Center (LCEC).  We designed the roof as an vegetated garden/overlook to the Rivanna River.  This is where a visitor first arrives and the roof signals the building’s larger goals: to connect to the Lewis & Clark story, and to engage the visitor with nature.  The vegetated roof is to be planted with species gathered by the explorers on their journey west.  The overlook, with a replica of a ship in the foreground and the Rivanna in the background, recalls to the visitor that the exploration was carried out by river.  The building also teaches about water, how precious it is, how it is the source of life: the roof water is directed to a riverstone channel that flanks the stairs descending to the exhibit space.  Water is collected in a basin at the entry below and the visitor crosses a bridge to enter the building – again, references to Lewis & Clark’s river journey as well as modern concerns about the environment and the importance of water quality.  The building is designed to achieve LEED Silver, and its many sustainable features are teaching examples for visitors.  Best of all though is how active the center is with community activities.  The building teaches about the Lewis & Clark’s journey, about nature while serving as an ideal setting for the activities organized by LCEC.  It is gratifying to see our goals realized. 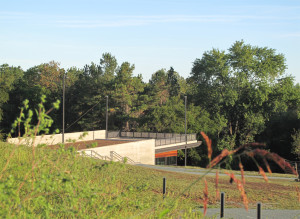 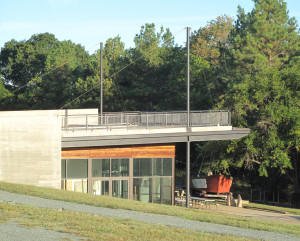 A sustainable architect needs to solve for more than would the typical designer.  I liken our process to solving the Rubic’s cube – where all the goals, challenges and givens must be in alignment.  The typical architect might be solving for the nine squares/side cube, we are solving for the 16 square/side Rubic.  Take for instance HEDS-designed RiversEdge House: Good urban design suggested house be sited in alignment with street grid.  Classic #PassiveSolar approach would rotate the primary windows toward south and shade with deep overhangs.  But the street grid wasn’t on a north-south axis.  To solve for both passive solar and urban siting, we angled the front wall toward south while maintaining the overall orientation to that of the street.

This project was designed as part of the RiversEdge community and speculative – we were the developers.  We know first-hand that passive solar takes advantage of free energy from the sun at no additional cost to the builder – a win-win solution. 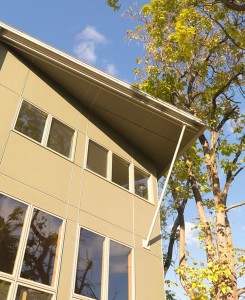 Bermann’s Rule (1847) – members of species are larger in colder parts of their range attributed to surface to volume ratio.

The natural world has many examples of adaptation to climate. The northern white-tailed deer has a lower surface area to volume ratio than does its more diminutive southern cousin and radiates less body heat per unit of mass, allowing it to stay warmer in the colder climate.  The southern white-tailed deer has a higher surface are to volume ratio facilitating heat loss through the skin, helping to cool the body.  The former is built to retain heat, the latter to cool. The advent of heating and cooling systems coupled with improvements in the building envelope and cheap energy have led to the homogenization of homebuilding. Compare the floor plan of a developer home in Vermont to one in Arizona. Apart from a little white cladding here and stucco there, the blueprints are the same. I grew up in a 1770’s home in Vermont that was four rooms over four (more volume to surface area). The traditional home in Virginia (where I now reside, apparently I can only live in states that start with “V”) is two over two (more surface area to volume). The former built to heat, the latter to breathe.  Vermont has 6006 heating degree days (measurement that reflects the demand for energy needed to heat a building), Virginia has half that number, 3304.   Vermont has 747 cooling degree days while VA has 1422 (twice as many).  Without air conditioning, modern heating, homes from the 18th century were adapted to conserve or reject heat — a strategy seen in nature and one which, when applied to the building industry, has low first costs. This is a strategy the Developer-Builder can easily adopt. It’s called Regionalism.

If a single flap of a butterfly’s wings can be instrumental in generating a tornado, so also can all the previous and subsequent flaps of its wings, as can the flaps of the wings of millions of other butterflies, not to mention the activities of innumerable more powerful creatures, including our own species. – Edward Lorenz, pioneer of the chaos theory