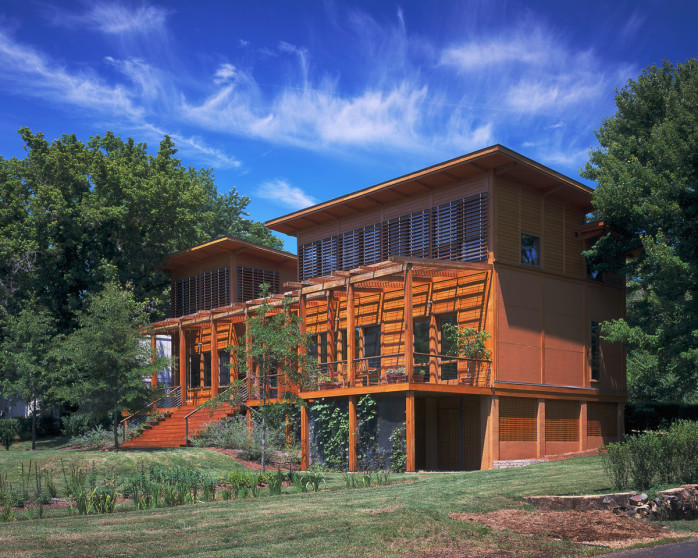 Seven-year-old Christopher Hays is an early riser, perhaps because sunshine saturates his room each morning before school. One of the first things he sees upon waking is his 11-year-old sister, Emily, through the open “window” that links their bedrooms, right about where their heads rest. If he wakes up facing the opposite direction, he’s greeted by a clothespinned wall of his and Emily’s changing artwork. Right now, his Kids’ Bill of Rights — which, Christopher admits, isn’t completely fair to adults — hangs among a smattering of watercolors. Above him is what may appear to be a bunk bed but is actually a loft that joins Emily’s room with his. A pulley-rigged basket — his mother’s idea — dangles off the side and is used, he explains, to pass things up and down without having to climb the ladder each time.

If you were to assume Emily and Christopher are being raised to be creative, bright children, you’d be correct. But their parents, environmental architects Chris Hays and Allison Ewing, give some of the credit to this Charlottesville house, which they designed in 1998. “There’s a series of strategies at play,” explains Ewing. “Some of those affect how we live, others affect our general health, and others are the right thing to do because they affect the health of our habitat.”

For Ewing and Hays, it’s hard to separate what’s good for the Earth from what’s good for the household. “When we think of sustainability, we really expand the boundaries to include the ideas of com-munity — at large, and also in the family,” Ewing says.

To that end, the house is set up with open public spaces, promoting that most valuable commodity: family time. The kitchen sits one foot above the living and dining rooms, but because there are no walls between the three rooms, it feels like one space — a design, Ewing says, “to enhance our ‘familyness.'”

From the elevated kitchen, which functions as a traffic-control tower of sorts, Hays and Ewing can watch the children play in the living room or dining room, and even on the porch or in the yard. “This space has a connectivity with the outdoors through the deck and the views,” Ewing says. That link is seamless; the wood on the deck has been stained to mimic the color of the living room floors. The result is that the outside feels like a part of the inside, even when it’s too cold to venture beyond the door. In fact, Emily’s favorite part of the house is the 600 feet of decking, which is home to a couple of swings and often becomes a scooter ramp for her and her friends.

Sure, this house is fun. But it’s also taught the kids a few things. “I want to be a whatcha-callit architect,” Christopher says. “A landscape architect,” he explains, after his sister helps him find the right word. And Emily says she wants to be an inventor, as she verbally sketches one of her innovations: “A cap that goes on the pipe on the end of a car. It changes smog into energy, and then you take the cap off and put it in a special thing, and that’s how you’d power your lights. It would help so we don’t have that huge hole in the ozone.”

Perhaps her inspiration came from the laundry list of green materials and technologies she’s surrounded by every day (with almost as many acronyms as a government phone book): low VOC (volatile organic compound) paints, which are available at most big-box home stores and are much less toxic than standard products; wood treated with ACQ (alkaline copper quaternary), which does not contain the arsenic or chromium found in most other treated lumber; SIPs (structural insulated panels), which are used instead of regular framing, and provide excellent insulation and noise reduction; VAV (variable air volume) handlers, which save energy because they work with the thermostat to control the amount of air that comes out, as well as its temperature. The remaining wood in the house was certified, meaning it met forest-preservation guidelines set forth by the Forest Stewardship Council; or it was reclaimed from aban-doned factories in New York; or it was local Virginia cypress, which is naturally resistant to rotting and, because it was local, required less money and fuel to transport.

“We also used a lot of plywood and engineered products,” Hays says. “So instead of solid wood, we’re relying on products made up of thin layers of wood, which can be a much more efficient use of wood.”

Hays and Ewing also focused on bringing in as much sunlight as possible. They extrapolated from research showing that children perform better in well-lit schools and designed the living room with two stories of windows on the south-facing wall, which let in enormous amounts of light even on an overcast day. And because of strategically placed horizontal louvers, which look like large shutter slats, sunshine is allowed in during the winter to provide heat (when the sun crosses the sky at a lower position), and then is blocked in the summer (when the sun is high), a use of sunlight known as passive solar heat.

The couple used environmentally friendly strategies outside as well. Christopher’s favorite is the pond in the back yard, which, the day after it was established, was already home to a snapping turtle. Not long after that came a heron and a hawk, and dozens of other little critters. Runoff from the roof is routed into an underground channel that feeds a bed of irises, which filter out the toxins in the water.

Hays and Ewing designed this house for the young family they had at the time, but they knew that Emily and Christopher would inevitably want more privacy and that the house will need to grow along with them. For example, the window linking their bedrooms will need sliding privacy panels when Emily enters teenagerdom in a few years. Eventually, Hays and Ewing plan to extend the second floor over the living room, which would reduce the amount of light downstairs but provide the children with more square footage upstairs.

Change is afoot for Hays and Ewing as well. Until last year, they both worked at the architecture firm William McDonough & Partners, renowned for its environmentally minded designs. At that time, Hays left to start his own business in part of the house. Ewing recently left her position as a partner at McDonough and is joining him full time, in what will be known as Hays + Ewing Design Studio.

“The thing I really appreciate about working here is that everything is rolled into one,” Hays says. “I can enjoy working away in the studio, and then connect . . . with the kids when they come home.” This lifestyle takes him back to the years he and Ewing spent working for architect Renzo Piano in Italy. “Living there enforced the idea that you should enjoy what you do and not compartmentalize — ‘Oh this is work, and I do it 40 hours a week in an office building,'” he says. “It should be about enjoying yourself, not about getting through the workday.”

First on the drawing board for Hays and Ewing is to design a “sustainable community” in their Woolen Mills neighborhood, named for the mill that thrived here in the mid-19th century.

This section of Charlottesville is infused with history but is dynamic enough that a modern aesthetic fits right in. “There’s an interesting texture to this neighborhood,” Hays says. “It’s historical without being precious.”

With several other architects, they bought 1.54 acres across the street from their own home, where they plan to build 10 similar houses: light-filled and reliant on recycled materials and passive solar heat.

“There’s a real potential to do surgical interventions here. It won’t change the neighborhood by any means, but it will start to give it new life,” Ewing says. And so, the evolution continues.

Natalie Ermann Russell is a freelance writer living in Charlottesville.