ECOBUILDING Pulse: inside the revolution 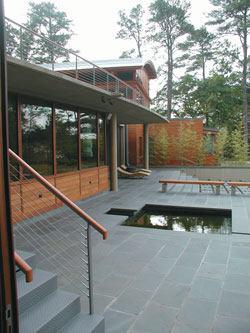 ECOBUILDING Pulse: inside the revolution

The bucolic burg of Charlottesville, Va., isn’t the first place you’d look for an internationally known architecture practice like William McDonough + Partners. But then, the eco-minded firm has never been one to play by the rules. The unconventional philosophies of its founding partner, Bill McDonough, FAIA, have redefined both green building design and the greater environmental movement. The firm has turned commissions from mainstream corporations like Ford Motor Company and Gap Inc. into leading-edge green buildings, garnering glowing press for both itself and its clients. “By creating structures that make oxygen, store carbon, harness energy as fuel, and provide habitat for hundreds of species, William McDonough + Partners is slowly but surely transforming the once lifeless and inefficient buildings that house corporate America,” reads a typically fervent accolade, this one from Outside magazine in 2001.

Despite its enviable success with large-scale work, there’s always been a place at McDonough + Partners for custom houses. “There’s something about working directly with someone on their home,” says McDonough. “You get to the level of the visceral experience of living there–the color of light on the walls, the sound of feet on the floor. It’s an intense personal connection.” Lately the firm has also turned its attention to single-family and multifamily developments, designing housing in Canada, Spain, and China, among other far-flung places. As usual, it’s going about the process in its own distinctive way. “Unlike many out there, they have an established framework of thinking,” says Pliny Fisk, a well-known green architect based in Austin, Texas. “It’s all very clear and logical.”

Much of this clear and logical thinking takes place inside an unassuming red brick building in downtown Charlottesville. McDonough + Partners moved into the space, which formerly served as the U.S. Army’s National Ground Intelligence Center, in September 2003. The new digs boast a more efficient configuration than the old office, a former warehouse across town, and the open floor plan suits the firm’s interdisciplinary nature. Many of its 30 employees have backgrounds in urban or landscape design as well as architecture, and they float among four studios–residential, community design, commercial, and industrial–rather than specializing in one project type. 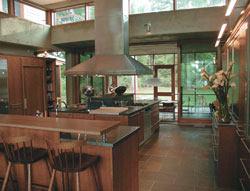 Take design partner Allison Ewing, AIA. Of the firm’s five current partners, Ewing is the one most associated with the residential studio. But she’s also played a key design role in commercial and institutional projects like Gap Inc.’s grass-roofed corporate campus and an unbuilt education center and panda habitat for the National Zoo. Diane Dale, another partner and the firm’s director of community design, holds degrees in landscape architecture and law rather than architecture. Her studio handles jobs as varied as a master plan for housing at Fuller Theological Seminary in Pasadena, Calif.; a framework for brownfield regeneration at Ford’s Rouge Center assembly plant in Dearborn, Mich.; and a set of sustainable design principles for the city of Chicago.

The firm’s willingness to reach across disciplines has enhanced its relationships with collaborators like Pete O’Shea, director of the landscape studio at VMDO, an architecture firm in Charlottesville. “They recognize when they need outside expertise, but at the same time they don’t compartmentalize,” says O’Shea. “There aren’t a lot of boundaries. If I have something to say about the architecture, I’ll say it and they’ll listen.” Such flexibility has helped McDonough + Partners win commissions for project types it hasn’t done before, all the while strengthening the versatility of its individual designers.

The staff’s freedom to work on different project types comes straight from the top, since McDonough likes to have a hand in every job the office takes on. He teams with the other partners, associate partners, and associates to come up with overall concepts, and reviews jobs periodically throughout the design process. “It’s like writing a piece of music,” he says. “The composer decides it’s a concerto, and in what key.” Having built a couple of houses himself while still in architecture school at Yale, McDonough takes a particular interest in the high-end private residences the firm designs. Before he had his own family, he’d arrange to spend a week or so living in each one before the owners moved in, just to make sure everything was perfect. “It was like tuning the house,” he says, continuing the music metaphor. “I could do things like make sure the doors closed beautifully. I still like to do it, but I can’t so much anymore.” 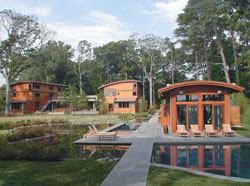 Now McDonough is a giant in the field of environmental design. He helped found the U.S. Green Building Council and the AIA Committee on the Environment, and trots the globe giving speeches about sustainability. The firm’s 1994 move to Charlottesville from New York City, where he started it in 1981, was precipitated by his selection as dean of the University of Virginia’s School of Architecture, a position he held until 1999. He leaves listeners bowled over by his vision of a world where all manufacturing processes and products–not only buildings but also shoes, cars, books, and virtually everything else–replenish the environment rather than poisoning it. In fact, most of the firm’s clients first took note of McDonough + Partners after hearing McDonough lecture. “Bill is not only a visionary architect but a great communicator,” says Alex Wilson, founder and executive editor ofEnvironmental Building News. “He’s inspired a whole legion of architects, and his communication skills can be understood by a lay public.”

While McDonough brings in the clients and provides big-picture design input, his staff makes sure the essence of his teachings permeates every pore of the projects they design. They’re not simply carrying out assignments; they believe in their mission as much as he does. “Bill’s philosophy is all about abundance,” says Ewing. Thus, instead of trying to talk clients into designing a smaller house, as many green architects do, she’ll focus on making it as sustainable as possible, no matter what the size. If a home’s water is heated with a renewable low-emission source like solar energy, goes the thinking, then why should its owner feel guilty about enjoying a long, hot shower? “The idea is ‘Do more good, not less bad,'” says associate partner Mark Rylander, AIA, invoking a phrase McDonough often uses. “With his vision of 100 percent sustainability, Bill keeps us from resting on our laurels.”

Of course, the technology isn’t there yet for a home to realistically achieve pure sustainability. So McDonough + Partners practices anticipatory technology, building in options for systems to be put in place when they become available. “At a house we designed in Virginia Beach, the curve of the roofs is south-facing,” says Ewing. “When the technology is more affordable, they’ll be able to hold photovoltaic panels.” At Courtyard on Bear, a mixed-use project under construction in Banff, Alberta, Canada, the costs of running the building entirely on wind power were prohibitively high. So it will function on a hybrid of gas and wind, with the gas systems convertible to wind in the future.

Courtyard on Bear and its all-residential sister project, Cave Avenue, represent the three components of McDonough’s holistic environmental strategy: ecology, equity, and economy. The firm’s constant goal is to satisfy all three concerns while creating beautiful buildings. The ecology side of the triangle has its roots in what McDonough + Partners calls an “essay of clues”: a thorough examination of each site’s topography, geology, wildlife, historical and built context, and water systems. “The essay of clues is a way of imbibing the site so we can make decisions intuitively,” says Ewing. “Out of this, the design develops.” At Bear and Cave, for example, the flow of harvested rainwater from rooftops down to courtyards and basement cisterns reflects the natural hydrology of the surrounding mountains and valley.

The social value of the Banff projects–the “equity” part of the firm’s goal–lies in the fact that they provide housing priced within the range of the resort town’s many retail and hospitality industry workers. At the same time, Ewing maximized Courtyard on Bear’s floor-area ratio, allowing the developers as much leasable space as possible. “The project needed to be economically replicable because the client wanted to influence other developers,” she says.

The question of McDonough + Partners’ influence on housing outside its own projects is an interesting one. McDonough himself has undoubtedly affected the way people design, as has the firm’s high-profile corporate work. But what about its residential architecture?

Environmental Building News’ Wilson, for one, thinks the custom homes pack a more powerful punch than many might guess, with their use of low-VOC materials, sustainably harvested woods, and other green elements such as geothermal heat pumps and sod roofs. “The houses McDonough and other green architects are doing provide an opportunity to try new systems on people who can afford to try them,” he says. “They’re also creating a market for green products. A few orders for a 6,000- to 10,000-square-foot house can make a difference as to whether the businesses that make these products get to the next level.”

From a planning standpoint, the 1998 master plan the firm designed for the New Urbanist development Coffee Creek Center in Chesterton, Ind., has altered conventional wisdom on larger-scale sustainability. It features natural storm drainage and wastewater treatment systems, a material selection guide that optimizes indoor air quality, and buildings sited to facilitate collection of solar and wind energy. “Coffee Creek Center showed that a green community infrastructure works, is practical, and doesn’t cost that much more,” says Patrick Condon, professor of landscape architecture at the University of British Columbia and an expert in sustainable communities. “It’s had a great impact on adding environmental sustainability to advances in New Urbanist design.”

The biggest measure of McDonough + Partners’ effect on housing, though, is probably yet to come. Acting on its growing interest in blending community design with architecture, the firm is working on several projects that synthesize the two. In Barcelona, Spain, it’s designing a mixed-use complex that includes two office buildings and an extended-stay hotel. In Benxi, China, the firm is planning an eco-village and designing prototypes for model homes. Among its other housing-related commissions are a master plan for a new town in England and a recently completed study for residential building strategies at the University of California, Davis. And several of its completed office buildings may someday be transformed into housing: The firm has designed them with operable windows and proportioning that allows eventual conversion to residential use.

While they routinely jet to the West Coast, Europe, and Asia on a few days’ notice, the architects at McDonough + Partners always come back to Charlottesville. “I had all my people here,” says McDonough, explaining why he kept the firm there after stepping down as U.Va. dean. “A lot of families were connected with the company. My children were born here, and it’s a delightful place to live.” Also, the city’s rich history dovetails with his desire to change the face of design. “There’s a tradition of revolution in Charlottesville,” he says. “It’s appropriate, since we’re trying to start a revolution, too.”