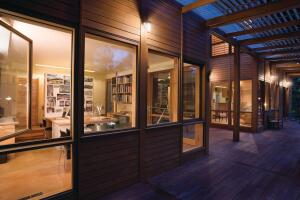 When the power went out for hours during Virginia’s massive snowstorms last winter, architects Chris Hays and Allison Ewing didn’t worry too much about the frigid temperatures outside. They were enjoying the southern sunlight pouring through their home’s two-story windows, while the fiber-cement floors soaked up the heat and the SIPs walls and roof wrapped them like a warm blanket. More than a decade after building their own home—an experiment in sustainable, affordable design—the Charlottesville couple experienced in a new way the power of passive solar.

As former partners at William McDonough + Partners in Charlottesville, known for its pioneering environmental designs, Ewing and Hays were at the forefront of the modern green building revolution. And although the movement hadn’t yet hit its stride when they completed this house in 1999, their approach was so sound it still forms the basis of their work today.

Passive solar design features that help heat the home in the winter and keep it cool in the summer are defining strategies, along with a thermally efficient building envelope, material reuse, a focus on indoor air quality, and stormwater mitigation. “Our home would probably be LEED-certified today,” Ewing says. “If we upgraded our HVAC equipment, we’d easily make Silver or even Gold, based on what we’ve been seeing on other projects.”

They’d found their ideal lot—in the established Woolen Mills neighborhood near downtown—and with views that face south. Like a good neighbor, the house aligns with the street grid, which placed it on a roughly east-west axis, allowing the most abundant sunlight to flood the living spaces in back. The building is separated on the ground level—work studio on one side of a cypress entry deck, living spaces on the other. Upstairs, an enclosed bridge connects the master bedroom above the studio with the children’s bedrooms.

The floor plan captures the site’s solar energy by banking all the utility areas—kitchen, three baths, and equipment closets—on the street-facing north side so that the two-story living areas can enjoy the southern exposure. To achieve that tricky balance between natural light and unwanted heat gain in a warm climate, the pair worked with a daylighting consultant and combined 0.36-SHGC double-pane windows with a series of louvered cypress panels that cover the upper part of the large windows.

“Because the back of the house has some western exposure, the deep overhangs weren’t enough, so the louvers and a trellis shading the first level were critical,” Ewing explains. “We didn’t feel it was appropriate to rotate the house true south, because that would have put it at odds with the urban environment.”

Hindsight is 20-20, but their original vision was crystal clear, too. Designed on an 8-foot grid to utilize standard-issue building materials, the house’s low-maintenance efficiencies have proven their staying power. The fiber-cement exterior siding has needed no paint touch-ups in the years since they installed it, and the durable fiber-cement floors store and release heat from the winter sun, as the couple had hoped. Custom windows that go up to the ceiling turned out to be a smart splurge, too, since the high operable windows in the living room and on the second-floor bridge exhaust warm air from below.

For mechanical systems, they chose “state of the shelf” technology—tested products that were becoming mainstream. In addition to a Trane variable-speed, high-efficiency two-stage gas furnace with two zones, they installed a Trane VAV (variable air volume) handler, which provides fresh air cued by carbon dioxide sensors. But while their 12-SEER cooling unit was the gold standard a decade ago, they now spec 18- or 19-SEER products.

Indeed, technology, and its costs, has evolved over the last 11 years. If the couple were designing their home today, they say they would incorporate solar thermal and tankless hot water. The crawlspace would be conditioned, too. “The current thinking is to seal the crawlspace and pass some air through to create warmer floors and a thermal buffer below the house,” Hays says.

Likewise, the cypress deck outside will soon be replaced with Cambia, a lower-maintenance poplar that’s been treated with heat instead of chemicals to resist rot. The architects like it because it looks like ipe and doesn’t have to be stained. “You can’t get certified ipe anymore, which is a signal that it’s been over-harvested,” Ewing says.

Green checklist notwithstanding, she and Hays are quick to point out that the highest goal of a sustainable house isn’t just environmental virtue, but also that the landscape and building have a lively relationship. “The pervasive light and the sense of connection you feel to the outdoors as you move around the house is more than a technical goal; it becomes a spiritual thing,” says Hays. “Every time we’ve been away, we’ve felt how lucky we are to come back to this place to live.”

Husband-and-wife design team Chris Hays and Allison Ewing earned their environmental stripes as partners at William McDonough + Partners in Charlottesville, but before that their work on large-scale projects took them around the globe, including stints in Italy and Japan.

In 2004, Hays launched a solo architecture and planning practice, working in the sunny semi-detached studio of their home, and Ewing joined him a year later. Their core belief that sustainability means enhancing whole communities led them across the street, where, with three other partners, they’re developing 10 lots on a 1.5-acre parcel. “It’s boots-on-the-ground architecture,” Hays says of figuring out how to build sustainably yet with a developer’s eye on the bottom line. The RiversEdge houses—some custom, some spec—start at $165 per square foot for construction costs and focus on strategies that have a reasonable five- to eight-year payback.

But whether it’s a single-family home or a large cultural building, “we think of the design process as solving a Rubik’s Cube,” Ewing says. “We’re designing for a whole host of things—sustainable aspects, economic goals, how people want to live, and creating a positive social climate by providing beautiful daylit spaces where people want to spend time together. We feel most gratified when all the colors are in perfect alignment.”

Cheryl Weber is a freelance writer in Lancaster, Pa.