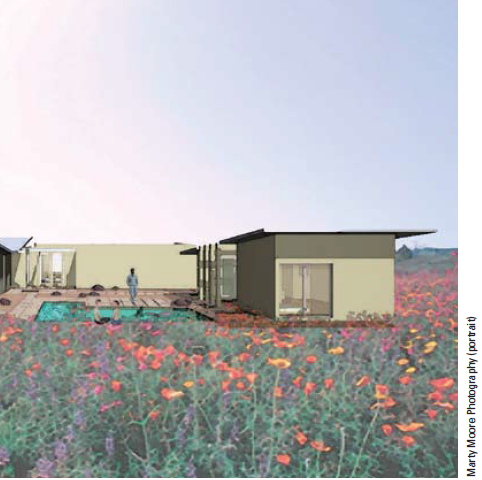 With the recent advent of Hays + Ewing Design Studio, a global partnership lands comfortably in Charlottesville.

Design has taken Charlottesville architects Christopher Hays, AIA, and Allison Ewing, AIA, around the world during their careers. Now the couple wants to apply their global perspective to a regional approach to sustainability. In launching Hays + Ewing Design Studio, the partners – in marriage as well as business – have brought that understanding home.

The couple’s shift to a local focus may come as something of a surprise for those who know their previous work with William McDonough + Partners. Hays, McDonough, and Russell Perry started WM+P in 1994, and Ewing also was an early WM+P initiate, joining the effort to complete a competition entry for what became one of the !rm’s !rst signature projects, Of!ces for Gap, Inc. in San Bruno, California.

Before landing in Charlottesville, Hays and Ewing already boasted portfolios that tended toward the cosmopolitan. The pair’s previous tours of duty had included stops in Japan – Hays at Nikken Sekkei, Ewing studying housing types on a grant – as well as the Renzo Piano Building Workshop in Genoa. Two decades into their respective careers, their experience encompassed projects on four of the seven continents.

In late 2003, however, Hays became the !rst to scale back on his contributions to the couple’s frequent-“ier miles when he left McDonough’s of!ce. “I sensed an opportunity to build on our experience with sustainability and address more local and regional needs,” says Hays. In the process, he also sought to realize a long-term dream of starting his own practice.

Hays began his solo effort in a light-!lled studio of the house he and Ewing designed for themselves, but there were two early projects whose site visits have required very little travel: a duplex makeover next door and a 10-unit development called RiversEdge across the street. Hays got involved in both not only on the design side, but also as a developer. “It has provided a great way to deepen our understanding of market-driven forces,” he says, and helped ful!ll the couple’s desire to !nd design solutions that are both sustainable and marketable.

Last summer, Ewing, who had become a partner at WM+P, joined Hays to form Hays + Ewing Design Studio. Residential projects form the bulk of their present workload, but the pair hopes to expand the practice as they move into institutional, commercial, and academic work. Still, the shift in scale and geography has already brought about a welcome change in the design focus for both Hays and Ewing. “By doing full-service work on smaller projects, we get an ideal integration of design at all levels – from concept to execution and from mechanical systems to materials,” says Ewing.

In their earlier work and what’s on the boards now, Hays and Ewing continue to develop a fresh outlook on sustainability. They’re also pursuing opportunities farther a!eld, including a recent commission for a new residence in West Virginia and on a community master plan similar in size to RiversEdge outside Tubac, Arizona. “What distinguishes us is our desire and ability to integrate building and landscape and to draw design ideas from nature,” Hays says. And that’s an idea that ought to feel at home anywhere. 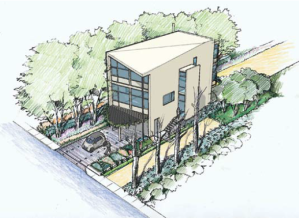 RiversEdge Community Eight highly efficient single-family houses and two Habitat for Humanity homes share a common garden and a rain garden in the preserved open space of this Charlottesville community’s narrow 1.5-acre site (left). Hays and Ewing wear many hats on the project, crafting a master plan, designing spec as well as custom homes, and developing the project in collaboration with several other local design professionals. Notes Hays: “Our experience on RiversEdge is a way for us take control as designers instead of being at the end of the train – particularly in how we can work ecological goals into the overall development as buyers come on.” 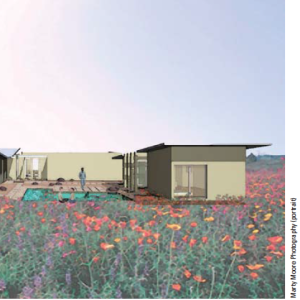 Tubac House A house design (above) that captures dramatic views of the striking desert landscape south of Tucson, Arizona, demonstrates Hays’ and Ewing’s abiding interest in establishing connections between people and nature. The line between building and landscape dissolves, too, with folded roof forms inspired by a nearby mountain and its stone gardens and pools in the courtyard evoking nearby stone washes. Notable among numerous sustainable strategies are walls made of autoclave-aerated concrete blocks, a toxin-free lightweight concrete material that provides thermal insulation and enhanced R-values.