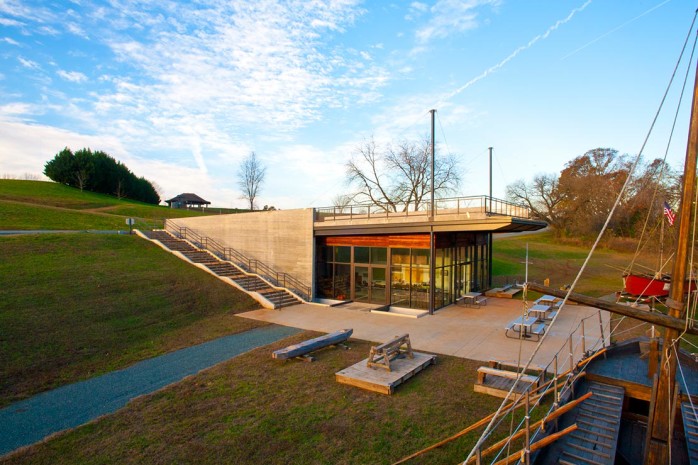 One can sometimes forget that Charlottesville is a river town, but AlexandriaSearls keeps the Rivanna firmly in mind. As director of the Lewis & Clark Exploratory Center, she’s helped influence the choice of its location (overlooking the river in Darden Towe Park) and its mission (educating visitors, especially kids, about boatbuilding and nature-based aspects of the Lewis & Clark expedition). “The river is an historic part of this community,” she says.

So it’s fitting that the center’s new home—a building designed by Hays + Ewing Design Studio and completed in October—harkens to the Rivanna, both in the river view that it prizes and in the boatlike form of the building.

Nestled into a hillside, the center is mostly invisible from its parking lot. “The building is something you discover,” says architect Allison Ewing—Lewis and Clark and their crew were often surprised by what they found in the landscape of the American West. “In a lot of paintings you see Lewis and Clark standing on overlooks, looking at landscapes,” says Ewing. “There’s a sense of heightened arrival.”

The center, whose programs began in 2001, recreates that iconic moment by presenting visitors with little more, on first sight, than a green roof that seems to grow organically from the hillside. Follow it out to the far edge, and you’ll find yourself taking in a view of the Rivanna from what amounts to an architectural precipice. It’s only by skirting around the side of the building that you’ll find the entrance.

“We wanted it to blend in with the environment, like the Mandan Villages,” says Searls, referring to the Native American community, in present-day North Dakota, where the Lewis and Clark expedition spent its first winter.

Yet the roof overhang, as it faces the river, also resembles the prow of a boat, slicing into space. It echoes the 55′ keelboat that sits nearby, a replica of the expedition’s flagship built by some of the kids who have been part of the programs here.

In fact, the new building takes many cues from traditional boat forms and materials. Cambia wood (a thermally-treated, eco-friendly choice) lines the underside of the eaves and harkens to the keelboat’s own wooden hull. So does the building’s board-form concrete exterior—a technique that leaves wood grain visible in the finished walls. Along the side of the building, as visitors descend steps to the main entrance, they may see stormwater from the green roof running through a riverstone channel.

Once inside, a north wall made mostly of glass helps keep people connected to the river. A large dual-purpose room (it houses rotating exhibitions and hosts activities) and the adjoining library are crisp and attractive, though they’re made of basic materials like concrete floors and white wallboard. Large photos of North American animals, formerly hung in Downtown Mall trees as part of the LOOK3 Festival of the Photograph, bring color and life to the space.

The center will continue with its program schedule until May, when it’ll open to the general public.