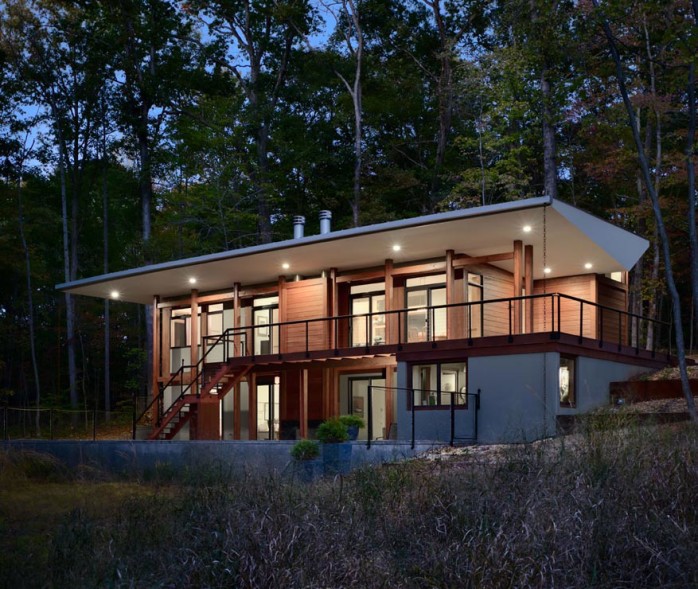 It’s a long way from London to the woods of northern Albemarle County. Paul and Ginger Ferrell lived in the British capital for 24 years, and as they eyed retirement from across the pond, they zeroed in on Charlottesville as the perfect place to relocate.

When asked if they considered living in town, they laughed. “No,” said Ginger. “In London we were only the thickness of two bricks from the neighbor, so we were ready for some space.” They bought a forested lot in 1999 and four years later were ready to hire an architect.

Ginger saw a Japanese-inspired house designed by Chris Hays, and she knew she’d found the right person for the job. For one thing, the Ferrells shared an interest in Japanese architecture. Hays and his wife Allison Ewing were then transitioning from posts at William McDonough and Partners to begin their own firm. “We didn’t have any preconceived idea of what the house should look like,” said Paul. “We left the design process up to Chris.”

The Ferrells did know, however, that they wanted a bit more space than they’d had in London. “The houses there were always a few feet too short,” Ginger said. And they knew they needed to be immersed in—and not to alter more than necessary—the surroundings. “We wanted something that didn’t require taking down every tree on the lot,” said Paul, a former immigration attorney.

What Hays + Ewing eventually delivered was a design that is rigorous in its simplicity: a two-story rectangle set carefully among the trees. There is much more here than meets the eye. A practice steeped in sustainable design found its expression in a delicate balance of modesty and spaciousness, practicality and leisure.

The house’s most unusual feature is its roof. As in traditional Japanese architecture, it dominates the external appearance of the structure, forming a dramatic V-shape that stands out in white against the humbly-sized, cedar-clad house.

The roof’s singular form results from a nifty trick: inverting the trusses, so that ceilings slope upward toward east and west to boost natural light. At the same time, a very ample 10-foot overhang on the western side minimizes solar gain in the summer. This overhang covers a large deck without need of columns to support its edge, so that anyone standing on the deck feels an uninterrupted connection to the woods.

Rain chains at the corners of the deck harken back to, Hays said, “very tranquil experiences” within Japanese teahouses, watching water pour down rain chains outside.

The inverted trusses, which slope up more sharply on the east side, give all the east-facing rooms—kitchen, master bathroom, and stairwell—a measure of drama. “The bathroom is narrow, but it doesn’t feel cramped,” said Paul. That’s due to a ceiling 12 feet high on one side, as well as carefully considered glazing. Three windows light this space, placed so that natural light increases by reflection, and curated views open to the exterior.

Materials in much of the Ferrells’ space are rich but subtle, like the black slate that surrounds the fireplace. (“I had to twist Chris’ arm for a mantelpiece,” Paul joked; the one that resulted is ultra-slim.) Dark-stained oak floors lend grounding to the lighter-hued window and door trim and kitchen cabinets, which the Ferrells finally bought from Lowe’s after a long search for something suitably minimal.

Despite the quietude of the living spaces, there are some provocative touches that reflect the rigor and cleanliness of clients’ and architects’ shared modern sensibility. The bed in the master bedroom is set up as an island, facing large western windows and backed by a dark built-in storage cabinet that doubles as headboard. Pendant lights, hung extra-low, serve as reading lamps.

An interest in the Bauhaus, with its notions of integrated design, helped inspire the stairwell design, which incorporates four large glass panels that Ginger, a stained-glass artist, acid-etched with a stylized forest image. Downstairs, a game room, glass studio, office, and guest suite open onto a patio and lap pool.

Landscape architects Nelson Byrd Woltz worked alongside Hays + Ewing from the beginning, and responded to the Ferrells’ wish for a low-maintenance retirement home. “The last thing we wanted was a lawn,” said Ginger.

Instead, the woods march right up to the eastern wall of the house. Views to the west, whether from the deck or through the dining/living room’s three sets of French doors, further connect inhabitants to the surroundings.

“Once we decided we wanted to live in the woods, it was important to see it every day,” said Paul. He and Ginger have found themselves noting the rise and fall of the local squirrel population—the result of design that, as Hays said, aims to “connect people to the places they live, the natural cycles and seasons.”

This is not only a matter of lots of windows; it’s a larger intelligence that incorporates landscape design, interior layout, and minimalism in furnishings.

“When it snows, it’s magic,” said Ginger—“like being in a snowglobe.”

With both members of Hays + Ewing having lived in Japan, and the Ferrells having a strong interest in Japanese architecture, incorporating design ideas from that country was a natural fit for this project. Japanese touches are scattered throughout the home.

The main living space on the second floor, like the downstairs rooms, has lots of glass in the form of sliding doors. These wide openings allow the interior to meld with the outdoors.

An especially tall kitchen ceiling harkens back to kitchens in Japanese monasteries.

In Japan, spaces are demarcated on floors with tatami mats. In the Ferrells’ lower level, Hays inlaid wooden planks at regular intervals in the concrete floor to create a similar visual effect.

Pocket doors save space and make for a less cluttered-feeling interior.