Announcing a house tour at the soon-to-be completed house on Linkhorn Bay in Virginia Beach.  The tour will be postponed date to be determined.  We will meet in the parking lot of the Cavalier Golf and Yacht Club at 1052 Cardinal Road, Virginia Beach.  Limited attendance.  Please RSVP to aewing@hays-ewing.com See more details below. 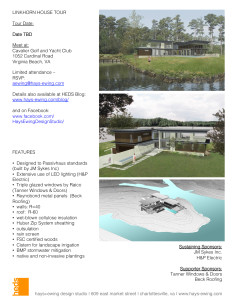 We believe in win-win solutions. Obstacles can be surmounted with creative thinking and a few skills. One area where architects can make a difference is in the public arena. An example: Using an design skills in 3D modeling, I was able to explore and propose a sewage tunnel that relocated a neighborhood sewage pumping station away from our neighborhood.

My neighborhood in Charlottesville, Virginia was faced with the threat of a much enlarged sewage pumping station (we already didn’t like the one we had much less the idea of one 4x it’s size). Engineers were paid to develop alternative options each of which had some impact on someone. No one could agree. The cheapest solution was to target the one in our neighborhood and without agreement, we had no doubt we’d see a new enlarged facility in our midst.

The neighborhood was frustrated with the options presented by engineers.  I decided to see if I could find an alternative option. Using a 3D sketch program (SketchUp), I developed a model of the surrounding area and introduced a flat plane at the level of the existing pumping station. With this datum established I could better visualize where the topography might accommodate a relocated station (while not an engineer, I made an educated guess that the new station would likely be at or around the same elevation of the existing one). What I discovered was that local sewage and water authority site was at around the same elevation as the pumping station, separated by a ridge. This was a lightbulb moment – I realized a tunnel might be a viable solution that everyone could embrace.

A neighborhood up in arms can be a powerful force and the tunnel idea might not have found legs but for the energy put forward by the neighborhood — after all, the tunnel was more expensive than enlarging the existing pumping station.  The neighborhood’s activism rallied the support of the Charlottesville City Council.  The engineers liked the idea.  An agreement was reached.  Funding was approved.

Last week the tunnel boring machine arrived in our neighborhood having tunneled from the sewage treatment center to our neighborhood. It did take a village and the many skills of its inhabitants contributed to the implementation of a happy solution.   Architects do have a unique set of key problem-solving skills and the combination of public engagement combined with creative thinking and visualization skills all contributed to that finding of the win-win solution.